Winter is a great time to grow your favorite lettuce greens. One of my favorite types of big leaf lettuce is this lovely little leafed daisy.

I started lettuce back in November and now I’m starting to get fat hardy red heads.
I’ve got lettuce in several different mediums at the moment.

Bucket system, EBB& Flow with agrigate and Hydro Soil mix of my making.

So far my favorite method for growing lettuce has been by the bucket. The bucket isn’t economical if you are going to use it for farm to market, but it’s a FANTASTIC addition to any small personal garden.

When grown in the bucket I’ve found the leaves are thick and waxy. A good quality in lettuce. That’s what gives it that ‘CRUNCH’ factor. Fresh juicy lettuce veins filled with yummy converted sunshine.

*Lettuce and sunflowers are both part of the Asteraceae family, one of the most diverse and largest families of flowering plants. Many of the members of this family are grown as food crops, including lettuce and Jerusalem artichokes. Others are considered ornamental, including asters, daisies and marigolds. This family also includes medicinal flowering plants such as chamomile and plants that are used to produce oils used in cooking, such as the sunflower and safflower plants.

Under Codex, every dairy animal can be treated with growth hormone, and all animals in the food chain will be treated with sub-clinical levels of antibiotics. Codex will lead to the required irradiation of all foods with the exception of those grown locally and sold raw.

Bring water to a boil, add rice and Quinoa. Mix in 1 tbs olive/coconut/sesame oil. sir. Add mesquite seasoning if you have it.

Add ALL to boiling water.

Once done stir and place in bowls.
Slice avocado and heirloom tomatoes with several sprigs of basil, place on top, season with salt, pepper, sesame oil, sesame seed and ginger if you have it.

The Fuego Potatoes as I have named them is just this.

Yummy red and white potatoes sliced a little thick in a pan with an avocado or coconut oil. ( A cast iron is BEST)

Dash of sea salt and pepper to taste

Cook till a nice brown and eat.

Takes about 20 Minutes to cook to best crunch.

Then slice an avocado* on top.

*Food from the farm. 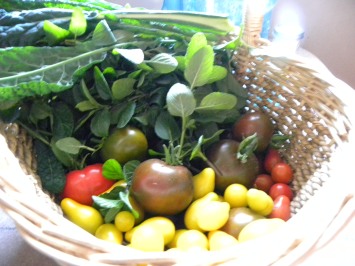 Some uses for Rosemary, the herb of memory.

The Rosemary is a long steamed short leafed bush with a strong aromatic appeal. It was used during the middle ages as an incense burning away the evils of sin and the plague. Its worn on the head in wreaths at wedding to help commemorate the event and last forever in the minds of all who attended. And it’s great for the body.

Rosemary can be used in many dishes: Potatoes, rubs for chicken, garnish, sauces, soups. You name it.

I prefer to chop up FRESH cut rosemary and put it in with my tomatoes.

“Rosmarinus means dew of the sea in Latin. It is found in rocky sites and woodland and scrub in the Mediterranean region, Portugal, and northwestern Spain. It is an aromatic, perennial shrub that is now widely cultivated for its aromatic leaves and flowers. Some of the legends connected with this herb are very curious. It is associated with the Virgin Mary. It is said that it used to flower white until Mary hung her cloak on a bush while fleeing Herod’s soldiers. It is supposed to be one of the herbs, along with lavender, thyme, pennyroyal, lady’s bedstraw, and costmary, found in the manger. For a long time, people believed the reason it would not grow over 6′ in 33 years was so as not to stand taller than Christ.

It is found traditionally in wedding bouquets as a reminder to the couple of their wedding vows. In the language of flowers it means remembrance and love. Greek students believed it improved the memory, and so they wore it in their hair when studying for exams. Another tale says that if a rosemary plant grows vigorously in a family’s garden that it is the woman who wears the pants in the family. In Egypt, it was found in the wrappings of mummies. In Australia, it is worn on Anzac Day, a day set aside to commemorate the dead. In France, during the Middle Ages, it was combined with juniper and burned in bunches in hospitals to kill bacteria. Modern research shows that it does have antibacterial properties. In Hungary, in 1235, Queen Izabella was stricken with a paralyzing illness. A hermit came to court with a preparation of rosemary soaked in wine, which cured her. Since then, this combination, known as Queen Hungary’s Water has been used to treat gout and baldness.”

Harvest and Use: Rosemary has many uses besides culinary. It is used as a medicinal, an aromatic, an ornamental in the landscape, as a dye, in cosmetics, and as a houseplant. Rosemary essential oil adds a piney scent to soaps, creams, lotions, perfumes, and toilet water. It is a stimulating herb and makes a wonderful herbal bath when you feel worn out and want to get your blood flowing under your skin again. Just put some in a muslin bag and get in the tub with it. You can also treat yourself to a cleansing and pick-me-up facial steam with a stronginfusion. Blend it in potpourri. It can be woven into wreaths and garlands. Rosemary sachets are very nice for scenting drawers. Dry needles can be added to other herbs and made into closet sachets to repel moths. These smell a lot better than mothballs and are not toxic. It yields a green dye.

Add a handful of sprigs to the coals before grilling for extra aromatics. Throw the stems into the wood stove for scent. Combine rosemary with lavender, santolina, tansy, and lemongrass into a tulle sachet and hang in the closet with woolens as a moth repellent.

Medicinally, a warm tea is good for colds, flu, rheumatic pain, indigestion, and as a stimulating drink for headache and fatigue. It is antiseptic and promotes sweating and the flow of bile. It acts as an antidepressant, a circulatory stimulant, and a tonic for the nervous system and the heart. It is a rich source of vitamin A and vitamin C, phosphorus, iron, magnesium, and zinc. It also has antioxidant properties. A strong infusion makes an antiseptic mouthwash and gargle. The essential oil can be used externally as an ingredient in salves for arthritis and to soothe aching muscles. Extracts are found in shampoos. A hair rinse of a strong infusion can help dandruff and is good for dark hair. Do not use the pure oil internally. Like all medicinal plants, be cautious when using as a healing herb. The essential oil should not be used internally and when used externally, it should be diluted as is true for all essential oils except lavender. It should not be used in pregnancy, as it is a uterine stimulant. Large doses are irritating to the kidneys and stomach, but used in lesser amounts as a seasoning, it is perfectly safe.

The flavor of rosemary harmonizes with those of poultry, fish, lamb, beef, veal, pork, and game, especially roasts. It also goes well with tomatoes, spinach, peas, mushrooms, squash, cheese, eggs, lentils, and complements chives, chervil, chives, thyme, parsley, and bay. Commercially, an antioxidant prepared from both sage and rosemary improves the stability of soy oil and potato chips. Rosemary adds character to mild soups, marinades, salad dressings, and bouquets garni. Include fresh rosemary in all your Italian sauces. Stud roast pork generously with garlic and rosemary sprigs by making a hole in the meat and pressing the garlic and rosemary into it. Try an herb butter by combining 2 teaspoons rosemary to ½ cup butter. Add it to fruit salad to enhance sweetness without adding sugar. Make a rosemary jelly for roast meats and poultry.

Harvest anytime by snipping the ends of the stems. This will cause your plant to bush out. If you do not want it to bush, pull off a few leaves or sprays. Never take more than 20% of the plant. Rosemary is so much better fresh because it dries into tough little sticks that stick in your teeth or ruin the consistency of culinary dishes. If you are cooking with dry rosemary, wrap it in a bundle tied to the pot handle for easy removal. Besides drying, you can freeze whole sprigs. When you need some, remove from the stem. Frozen rosemary is stronger than fresh.

World’s Oldes’t  Boxer, Kira is 14 years and some days. She is a good example of nutrition and exercise of ones dog. She eats Solid Gold’s Hundenflcoken, green cow, the Sea meal and coconut oil with the occasional cannabis oil.

War on HEALTH. The Tyranny of the FDA

Week one: We’ve had a very warm welcome into the community. (even though we squeezed in right at 0900)Taking on a booth at a farmers market is no easy task. First week all we had was our shade cover, two nice tables, a cloth and hand written signs to go with our fresh picked produce.

We did pretty well. Sold out our spinach, the lettuce and herbs. I think folks are wary of the word Organic, and being the new guy we had a lot of folks smacking their heads at missing us the first round of their shopping.

Second week we had a nice table cloth, some baskets and even more avocados. We had softies for .50cents which shocked most.

“Yes…they’re fantastic, buttery and ready to be eaten today…I can’t eat them all, so please take some home!”

When folks came back after week one they couldn’t stop the barrage of excitement one tasty organic avocado offered them! I guess they REALLY liked them.

Horse slaughter continues despite lack of regulations in what ‘slaughter’ horses are given via fed and medication. RX that have not been tested for toxicity and long term damage if consumed.

Straight from the Horse's Heart

(March 27, 2012)— Front Range Equine Rescue and The Humane Society of the United States
filed a legal petition with the U.S. Food and Drug Administration to prevent former companion,
working, competition and wild horses from being used as human food. The petition alleges that
the drugs given to these horses throughout their lives are banned by FDA and/or potentially
dangerous to humans. Using these horses for human consumption creates an unacceptable and
illegal public health threat under the Food, Drug and Cosmetic Act.

Current FDA rules do not require sufficient testing or documentation to ensure that former
companion and other non-livestock horses slaughtered for human food do not contain or have not
been administered prohibited substances. The “killer-buyers” who acquire these horses typically